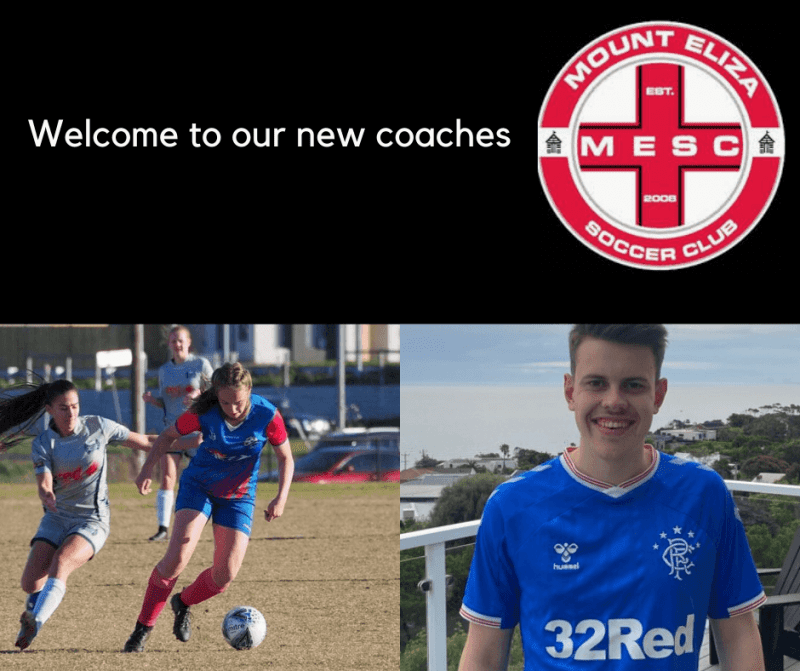 We are pleased to announce the arrival of two new coaches to bolster the club's coaching roster.

"Sarah Tebbutt, Captain at Southern Utd FC, has joined as our Girls Skill Development Coach. Sarah comes to us with a wealth of playing experience starting her football career at the age of five. Sarah’s appointment is a great opportunity for our girls in having a positive role model to guide them on their football journey.  I look forward to working with Sarah and continue to grow our club’s relationship with Southern Utd." said Gary Talbot, MESC Director of Football

"As a Mount Eliza local, I’m excited to work with Gary and the Girls at Mt Eliza Soccer Club. I’ve been fortunate to have played soccer at a high level at Southern United Football Club in the NPLW and VPLW over the past four years, and will be captaining the Southern United senior team in 2021. As Head of School at Peninsula Grammar in 2019 and coach of the Peninsula Grammar girls’ senior team in 2020, I’m very passionate about working within the community and developing young, local talent." Sarah Tebbutt, Senior Women’s Captain, Southern Utd FC

We are also pleased to announce Alex Hall, our new U6 Skills Development Coach, Alex says he loves the game and played since he was very young, football truly is a religion to him. Alex's past experiences include coaching the intermediate A’s at Peninsula Grammar, helping with coaching during the off season with Somerville Eagles and more recently a stint coaching in America for 4 months. He can’t wait to get started and meeting the next generation of talent at MESC.